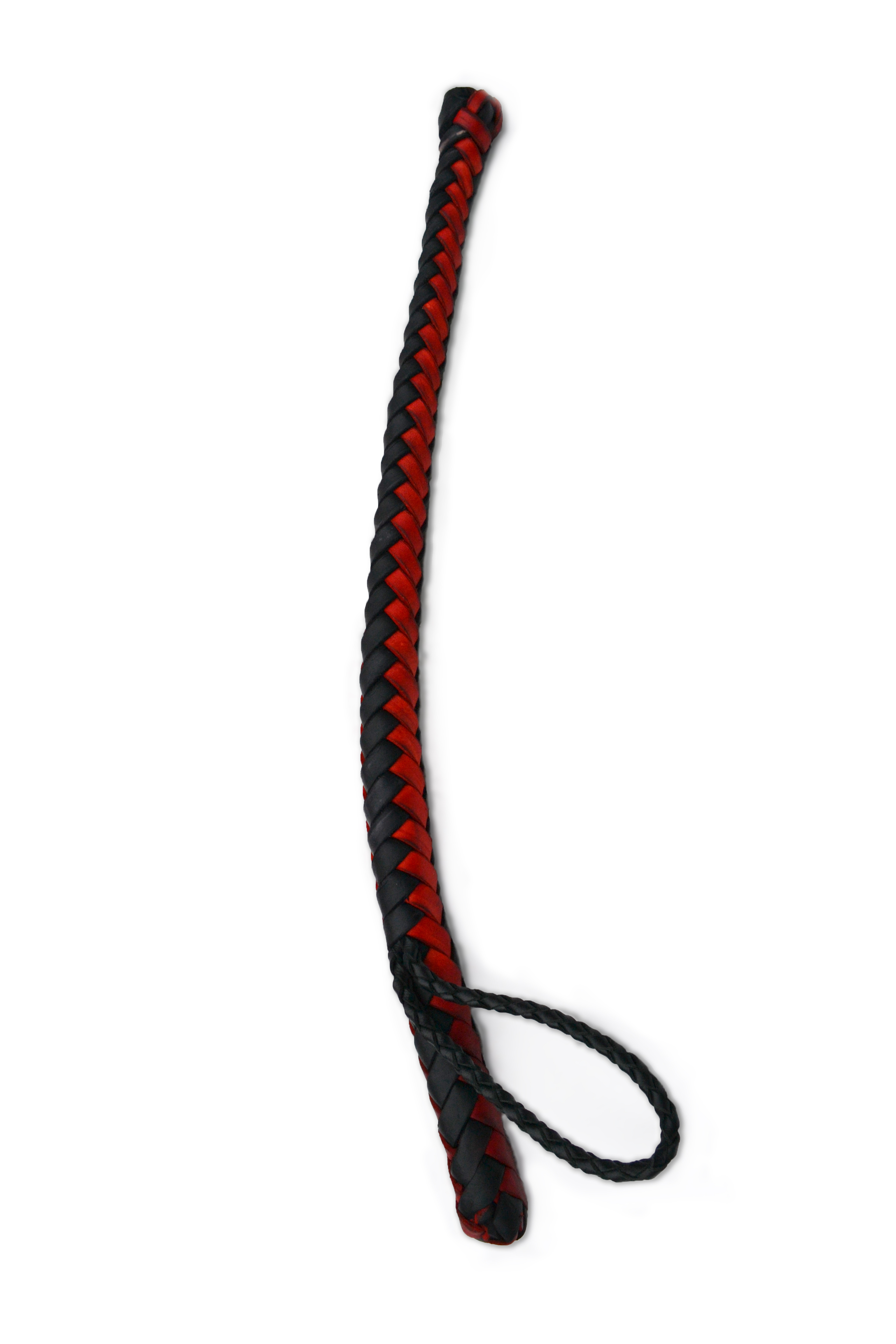 I received the "Volchatka" that I had ordered from you, and I must congratulate you for the superb quality of the aforementioned product.
by Joaquin from Spain, May 08, 2015

It’s worth the price, taking into account not only its quality but that’s is also a handicraft item.
I’m very satisfied with this purchase. 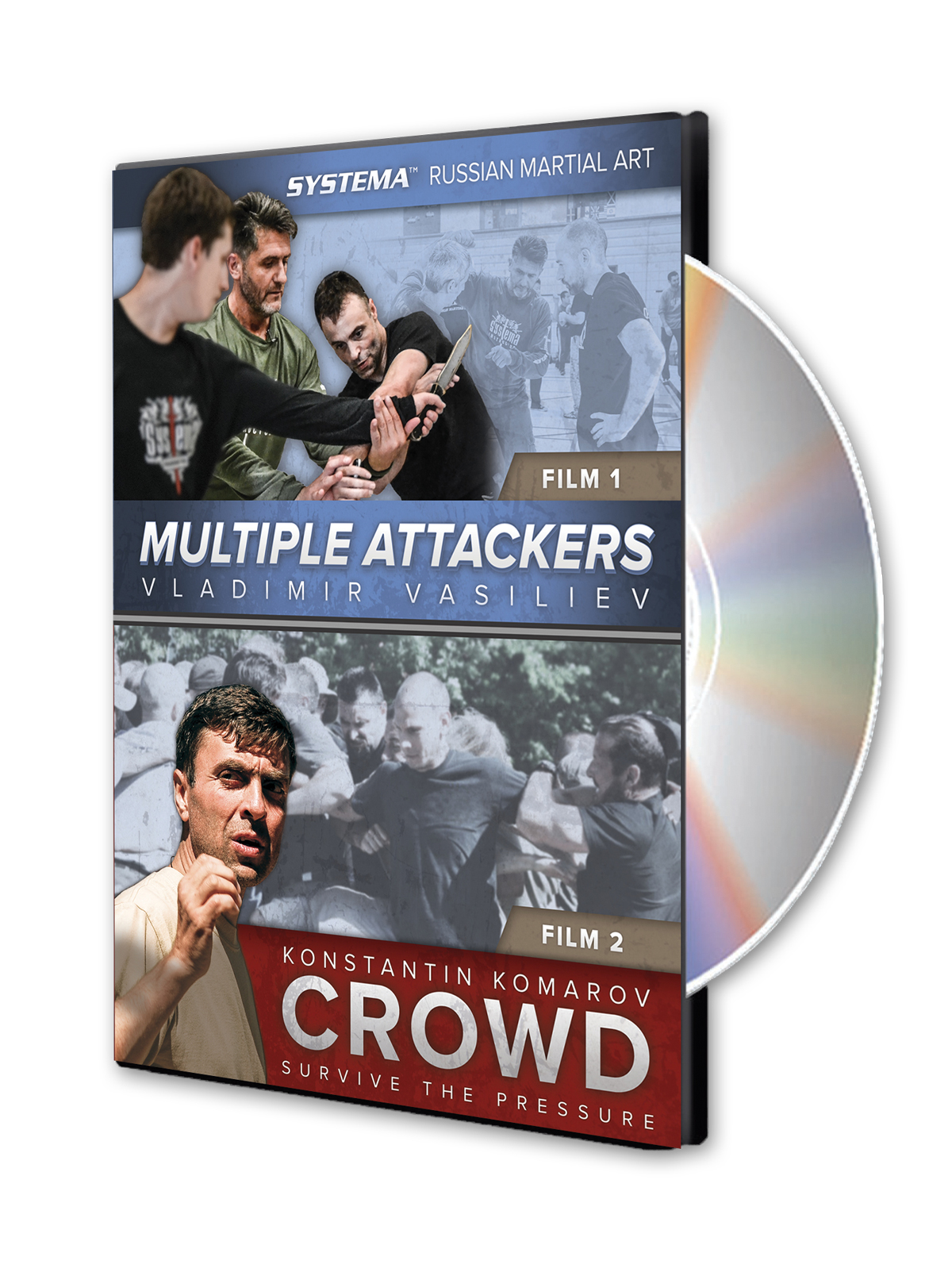 Major Komarov skilfully showed how Systema allows to adapt to a crowd and not resist it, how to control your movements and internal condition and therefore survive. 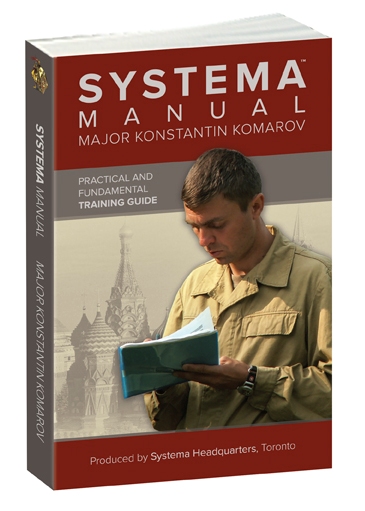 This is a significant book for anyone studying Systema, or getting started in the process.
by Anthony Lucas, September 19, 2014

What makes this book a must have, is its profound in-depth information. The personal experiences mentioned, gives the validity of this manual its prestige. The information is comprehensible, that can be applied in your work, as well that of your students. Upon reading this great work, I feel as though I've been psychically catapulted beyond the 6th dimension.
Totally worth your time, and effort....... Make the right decision! 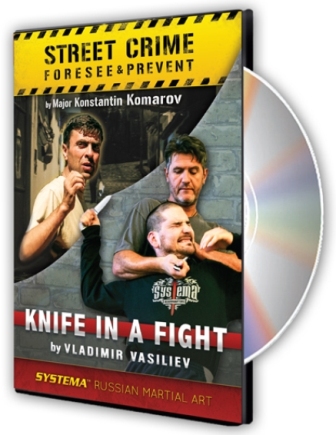 As a police officer for the past decade, I have interviewed hundreds, if not thousands of victims of street crimes.
by Joe Mayberry, April 23, 2013

In most all cases, they always stated to me that they were “caught off guard” or did not see the criminal before it was too late. The majority of these crimes would have never happened if the victims were just a little more vigilant.

Major Komarov possesses an encyclopedic knowledge of psychological aspects involving criminals, their intents and methods. His depth of knowledge of the criminal mind rivals that of many high level criminologists and profilers. In addition to his intellect, Major Komarov also has the personal experience of many decades of field work, not only on the battle field but also on the streets. This adds a lot of legitimacy, urgency and authenticity to his presentations, lectures and classes, which most so called “experts” lack.

As one of the privileged to have been in attendance for this class at Systema Camp 2012, I can personally say that the topics, theories, practice and work are all top notch. As someone who has attended classes at the FBI National Academy, I can honestly say that Major Komarov’s presentation is far more superior and relevant to what is even being presented by our own national Law Enforcement departments.

Major Komarov has the great ability to present very serious subject matter in “layman’s terms”. The work and topic, even though it is very serous, is thoughtfully presented to which any citizen can easily retain and put into action.

While starting work as a police officer many years ago, I was told be a veteran officer that in order to catch a criminal, you first needed to think and act like one. Put yourself in the mindset of the criminal and then it will be easy to see the simplicity of their actions in committing a crime. It is then that we can have a foresight into their intent. Major Komarov provides us with the tools to delve into the mind of criminals in a clear and precise manner. And knowing your enemies intent is the majority of the battle.

In short, I cannot recommend this presentation more highly. Whether you are a Systema practitioner, student or just a concerned citizen, the material can save you from serious harm, injury or just being a victim of a pickpocket. If you are serious about your personal safety and that of those you love, I highly recommend this material presented in this video presentation. 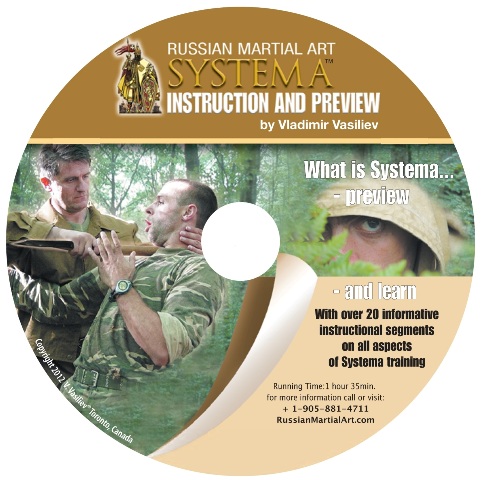 FREE DVD – SYSTEMA INSTRUCTION AND PREVIEW
by Chad Genereux, May 26, 2009

This is the martial art I have been looking for my entire life!

Teachings of the Russian Breath Masters 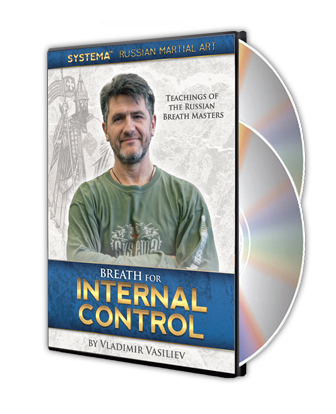 The excercises in the new Internal Control DVD seem so profound it's almost hard to believe they can be so simple and straight forward.
by Keith Hollett, May 26, 2012

From all levels of stress great and small, we can learn to identify what's going on inside of us, work through it and then conciously recover. It just seems so important on so many levels in martial arts and day-to-day life in general.

The lessons in this video are truly a gift, thank you Mikhail, Vladimir and Valarie

Clothing as a Weapon (DVD) 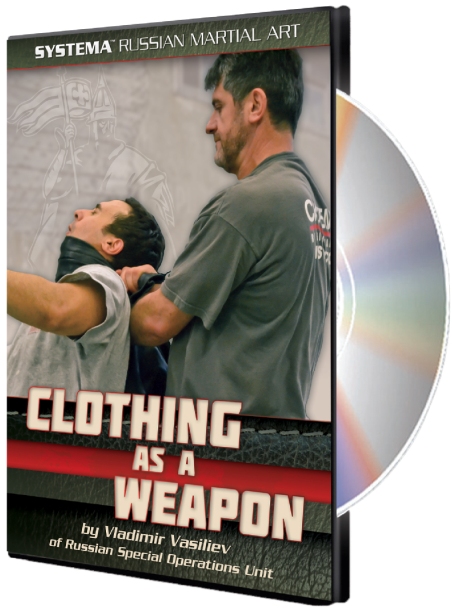 Vladimir's new video Clothing as a Weapon, opens up a whole new world for me, on how you can defend yourself in a confrontation, or the many different ways you could attack using your own clothes!
by Adam Zettler, September 22, 2012

Watching Vladimir demonstrate this work using clothing was awesome! I was fortunate to be in this video helping with the demonstrations. And I can tell that having experienced Vladimir's work first hand, his precision, speed and his control was amazing.

I thought escaping from my own coat would be easy, until I tried :) My own tension in my body was preventing me from escaping properly! I recommend everyone to watch this video, then try it yourself, you wont regret it! 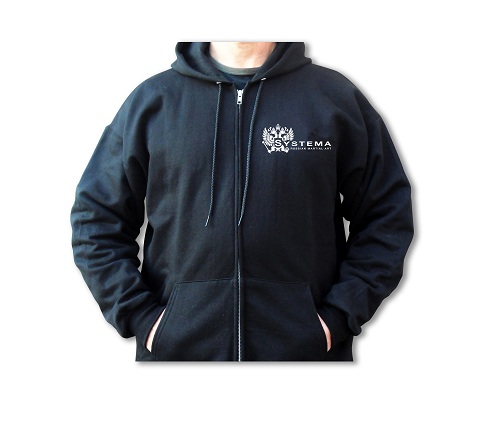 Just tried on this sweater, it looks pretty good.
by Derek Santos, March 22, 2010

My girlfriend said that my guns look bigger. Score. 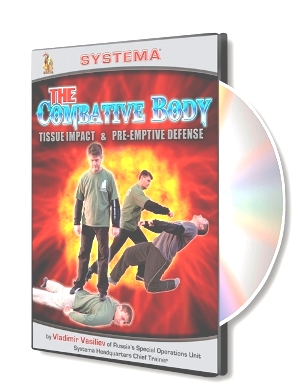 With all the talk of sustainability and being “green” these days, have you ever stopped to consider how these concepts apply to your survival and combatives training?
by Kwan Lee, May 10, 2011

Has your understanding of health provided a meaningful way of living pain and injury free, and are you able to apply this knowledge to your personal protection training? With “The Combative Body,” Vladimir provides us with a detailed view of the holistic fighting approach of Systema, and for the first time on video, he breaks down our unique and sustainable methods of fear-reducing bodywork and bridges this to a rare treatment of the mechanics behind his legendary fistic “shortwork.”

The lessons shown in the first half of this video will give you a deeper understanding of why we do Bodyweight Massage and how it is carried out. You quickly see the importance of walking massage once you realize that if you can’t be calm when you are being stepped on, you can’t remain calm when you are worked harder or deeper in a fight or other dangerous situation.

The segment builds successively from relieving muscular tension to freeing up joints with unusual but entirely common-sense methods and then moves into the combative realm with clear demonstrations on how to detect residual tension in the body using strike energy. Once again, we are shown Tissue Impact, how using strikes is an excellent way to heal and empower your partner while indirectly gaining understanding of how to locate and exploit fear, tension, and imbalance.

We are shown a comprehensive routine to address every part of the body, from head-to-toe, and another that is an “express” procedure based on a cursory assessment of major tension zones, which is handy for a warm-up or instant therapeutic relief. The Joint Tapping chapter alone is worth the price of admission.

By the end of this segment, you will be armed with the tools to stay calm and eliminate fear in the body so that it is ready for just about any threat in life.

Just in case you were wondering, this kind of body “annealing” is the only way that the pre-emptive work shown in the second half of the video can be accomplished. Previously, we could only sit and watch in awe as Vladimir performed his shortwork magic, but with this segment on bodywork, we now have the means of achieving the requisite baseline relaxed state to approach his extraordinary method of real-world striking.

With the segment on pre-emptive strikes, Vladimir shows us why Systema striking has no equal. I have to say that this is my favorite part, though without the zeroing-out gained from the bodywork, and other preparatory work with the breath, there is little hope for being relaxed enough to avoid injury and no hope for intercepting the intent of attackers, as Vladimir so aptly demonstrates.

As you grow in Systema, you begin to realize that if you cannot rid yourself of the tendency to tense up before striking or being struck, you will not be able to control the fear in your body. When you are uncontrollably tense, you cannot properly dose punches with precision let alone deliver anything beyond brute one-dimensional strikes to just one person at a time. Vladimir gives you the foundation to transform your stiff punching arm, resembling a linear battering ram, into a whip-like snake capable of masterfully spreading its bite over multiple targets and from unusual angles.

With the step-by-step instructional breakdown, you can learn how to move your hands to cover all bases and fill in all the gaps that your opponent leaves open. It certainly explains why I always feel like a human piñata when I spar with Vladimir and why his strikes come from out of the field of view and outside of the realm of expectation.

At the very least, this video will give you new perspective on what is actually possible in this area of hand-to-hand combat instead of defaulting to the played-out phrase that “the human body can only move a certain number of ways.” In Systema, we know that this is just the beginning. 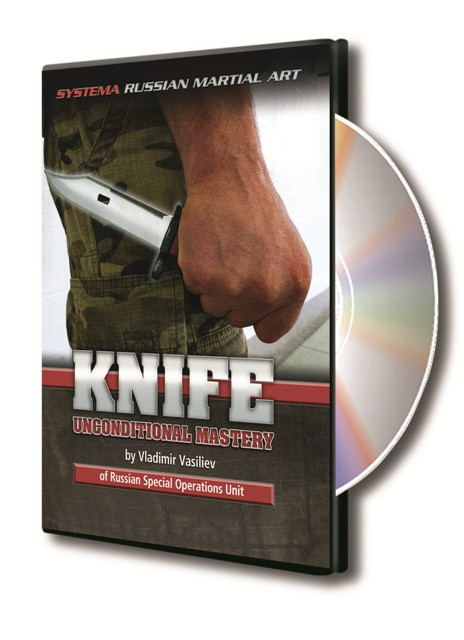 I have never seen anyone as so complete skilled as Vladimir!
by Brad Pryer, April 27, 2010

Thanks for this DVD, no mixed Martial Artist should be without it...

Defense Against 2 or 3 Attackers

Up until now, I really didn't think there was a martial art that honestly addressed the topic.
by Martin Laverdiere, June 28, 2011

This DVD is absolutely incredible. I learned more from watching this in 90 minutes than I did in 10 years of Karate. This stuff really works. Incredible! Bravo! 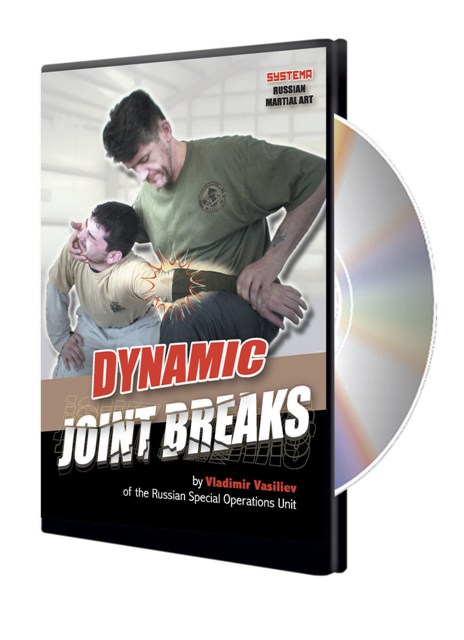 I am in a military police instructor, my specialty are guns.
by Mr Anonymous, November 26, 2008

I am a black belt in ninjutsu, jujitsu.
Since I bought this video, I was shocked. It is practical, fast and clean.
All I request is give me more.